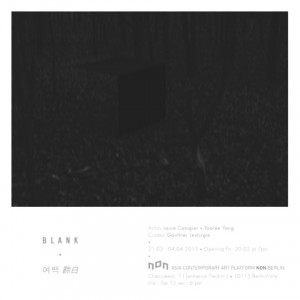 « Vladimir : And Where were we yesterday evening according to you Estragon : How would I know ? In another compartment. There’s no lack of void. » (1)

In vis-à-vis, Laure Catugier and Yooree Yang’s works look profoundly different : either through their aesthetic, the medium or else the impressions we get out of them. Yet, common curiosities lead them over shared ground; notably towards an expanded sense of architecture and space, whether constructed or conceived, built or imagined.

The paths of these two young artists also show similar trajectories. Laure Catugier was born in Toulouse (France), where she studied architecture and art before choosing to settle in Berlin. Yooree Yang also lives and works in the German capital city, after spending her childhood in Jeju in South Korea and studying art in Marseille (France). Interested in developing exchanges between Asia and West Europe, while attempting to avoid stereotypical discourses, NON Berlin perceived a potential dialogue between the two artists.

This exhibition project is also fed by these displacements through the mix of languages : between French (shared and chosen by the two artists), English, German and Korean. A constant translation game leads us to articulate the project around one word: « blank », itself suggesting multiple meanings. Some of the possible derivations of this English term enable us to build precise logics between these two expressions.

Absolutely physical, the work of both artists introduces us the presence of absence (2). This paradox escapes from the poetic sphere of the language to find plastic expression in space.